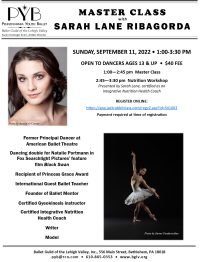 A one and a half hour ballet class, followed by a nutrition workshop for ages 13 & up. $40. 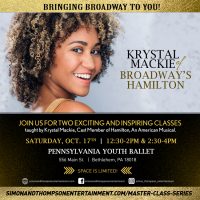 PAST MASTER CLASS INSTRUCTORS HAVE INCLUDED: 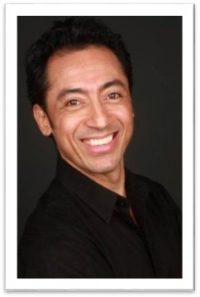 A native of Cali, Colombia, Juan Carlos Peñuela began dancing at the age of 12 with Incolballet, a ballet-centered secondary school. After graduation, Mr. Peñuela was invited to join Colombia’s National Company as a soloist, Ballet de Cali, by Artistic Director, Gloria Castro where he performed in a variety of leading roles in contemporary works as well as classical pieces, including the principal male in Les Sylphides, Colin in La Fille Mal Gardée, and Franz in Coppélia. Mr. Peñuela has also danced with the Ballet Arizona in Phoenix, Dance Theater of Harlem, Pennsylvania Ballet, Maximum Dance Ballet Gamon. In 2001 and 2002, Mr. Peñuela was selected to represent his native Colombia by performing in the Festival Internacional de Ballet de Miami, featuring dancers from more than a dozen countries worldwide. Guest Ballet Master and Repetitur with Compania Colombiana de Ballet – Incolballet in Colombia, Chamber Dance Project, Lexington Ballet, The Ajkun Ballet Theatre in New York City and Earl Mosley’s Institute of the Arts International Summer Intensive in Kent, CT. Juan Carlos is the official ballet master of the annual International Ballet Festival of Colombia. 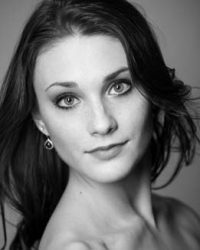 Born in San Francisco, California, Sarah Lane began her dance training in Memphis, Tennessee under the direction of Pat Gillespie at the Memphis Classical Ballet. When her family moved to Rochester, New York, she continued instruction with Timothy Draper and Jamey Leverett at the Draper Center for Dance Education.

When Lane was 16, she received a full scholarship to the Boston Ballet’s Summer Prog…ram. In 2000 and 2001, she was awarded first place and the Capezio Class Excellence Award at the North American Ballet Festival. Lane was the Silver Medalist, the highest medal in the Junior Division, at the Jackson International Ballet Competition (2002). During the competition, she traveled to Washington, D. C. to perform at the Kennedy Center as a Presidential Scholar in the Arts. That same year, Lane also won the Bronze Medal at the Youth America Grand Prix Competition.

Lane joined American Ballet Theatre as an apprentice in August 2003, became a member of the Company’s corps de ballet in April 2004 and was appointed a Soloist in August 2007. Her roles with the Company include a Shade in La Bayadère, Galya in The Bright Stream, Blossom in Cinderella, Gulnare in Le Corsaire, Amour and a flower girl in Don Quixote, Anne in Christopher Wheeldon’s VIII, the Flames of Paris pas de deux, the Two of Diamonds in Jeu de Cartes, Youngest Sister in Pillar of Fire, one of Juliet’s friends in Romeo and Juliet, Princess Aurora, Princess Florine, the Fairy of Charity and the Fairy of Joy in The Sleeping Beauty, the pas de trois, Polish Princess and a Little Swan in Swan Lake, a Goat in Sylvia, a leading role in Theme and Variations and roles in Birthday Offering, The Brahms-Haydn Variations, Désir, Drink To Me Only With Thine Eyes, Glow – Stop, In the Upper Room, Kaleidoscope, Seven Sonatas, and Sinatra Suite. She created the Chinese Dance in Alexei Ratmansky’s The Nutcracker.

Lane is a Princess Grace award winner. She was a recipient of a 2008 Leonore Annenberg Fellowship in the Arts. She was the dancing double for Natalie Portman in Fox Searchlight Pictures’ feature film Black Swan. 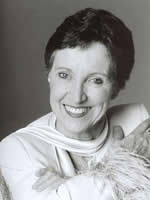 Angela Whitehill, Founding Artistic Director of Burklyn Ballet Theatre was trained by the National Ballet of Canada and at the Arts Educational Schools in London.
She danced professionally with the Ballet Paris, Jack Emile Litler and Jack Hylton Productions in England and Europe. Ms. Whitehill was the founder and director of London School of Ballet U.S.V.I., New Jersey’s Shore Ballet Company, Vermont Ballet Theatre and Burklyn Youth Ballet and has worked as artist-in-residence at Ocean County, Castleton State and Colby-Sawyer Colleges. In 2005 she produced a Nutcracker Key West, while acting as Artistic Director for Paradise Ballet Theatre. And in 2006/07 served as Artistic Director of the Huntington Ballet Theatre, Long Island NY where she produced The Nutcracker and a full length Sleeping Beauty.

In 2008 she will proudly serve as the adjudicator for the South West section of Regional Dance America.

She is the recipient of eight Vermont Council of the Arts grants, NJ Francis Hopkins Memorial Award, the NJ Institute of Technology Authors Award, Vermont Woman of Achievement Award and is listed in Who’s Who, Who’s Who in Entertainment, and Who’s Who Women of the World. She is the co-author of The Parents Book of Ballet (Meriwether 1988, second edition- Princeton Book Co., 2003), The Young Professional’s Book of Ballet, (Princeton Book Co., 1990), The Dancer’s Book of Ballet (iUniverse.com 2000) Ballet Magic – The Burklyn Story (QCP 2002) and Nutcracker Backstage (Princeton Book Co., 2004). Since retiring as Artistic Director she has become the founder and Artistic Director of Ballet Umbrella which incorporates both Dance Counsel, an advice and counseling service for parents, young dancers and companies and Burklyn Designs, a costume design and seminar program. 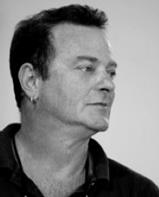 As a member of the New York City Ballet, Mr. Fleming danced solo and principal roles in works by George Balanchine, Jerome Robbins and Peter Martins. He also headed a group of soloists and principals from the New York City Ballet, which toured Europe and performed his choreography as well as that of George Balanchine. With Mr. Balanchine’s encouragement he embarked on a career as a choreographer and received a Fellowship from the National Choreographic Institute.

Mr. Fleming served as the Artistic Director of the Compañia Colombiana de Ballet at the Teatro Colon in Bogota, Colombia from 1985 to 1990. He was named Artistic Director of Bay Ballet Theatre in Tampa, Florida in 1993. In the mid 2000’s, Mr. Fleming was Co-Director of Contrast Dance Theatre based in New York City. He served as Assistant Director and Resident Choreographer for The Rock School for Dance Education, formerly of the Pennsylvania Ballet, for nearly ten years. His personal student roster has yielded professionals in nearly every division of the field, including members of some of the most prestigious companies in the United States. He has and continues to guest teach at countless schools and companies across the country and globe. Mr. Fleming has enjoyed and is currently undertaking a freelancing choreographic and teaching career.

He has choreographed a broad variety of works appearing in the repertoire of a number of different companies. Included are traditional full-length works, repertoire, and everything in between. Works seen throughout the country and internationally include The Who’s Tommy, pas de deux Opus Three, The Myth and Madness of Edgar Allan Poe, Janis & Joe, Cafe Music, Gaspar, Play Ball!, and also several different instillations of The Nutcracker and Romeo and Juliet. Musical works include Honky Tonk Angels, the Garth Brooks musical, an international tour of K2, and Candide!, among others. Other works of considerable note include that celebrating the life and work of Anton Dvorak in the Czech Republic, The Awakening Ballet in collaboration with renowned artist Jean-Claude Gaugy, NBC television special Degas and the Dance, operatic works, feature coach and highest rated episode of MTV’s MADE in 2005, along with countless medals of accomplishment by students performing works of his in such acclaimed competitions as Youth America Grand Prix, Grand Prix du Cirque, Moscow Competition, and New York International Ballet Competition. Mr. Fleming’s choreography recently featured on the FX series Rescue Me, which aired August 3rd, 2010. 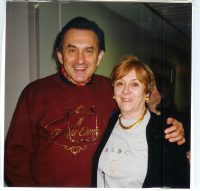 As both premier danseur and choreographer, Mr. Briansky performed with such renowned companies as the Ballet des Champs-Elysees, the Ballet de Paris, London Festival Ballet (English National Ballet) the New York Metropolitan Opera Ballet, the Munich Opera Ballet, the Teatro Colon of Buenos Aires and the Chicago Opera Ballet. During his career, he also partnered many leading ballerinas, Margot Fonteyn, Maria Tallchief and Violette Verdy to name a few.

Mr. Briansky served as the Associate Artistic Director of the Ballet de Rio de Janeiro and Artistic Director of “Children of Theatre Street,” the Academy Award nominated feature documentary film about the Vaganova Choreographic Institute in Leningrad. He also translated “100 Lessons in Classical Ballet” by Vera Kostrovitskaya of the Vaganova Institute and “Classes in Classical Ballet” by Asaf Messerer, ballet master of the Bolshoi Ballet.

An international teacher and coach, Mr. Briansky directed principal dancers from the New York City Ballet, American Ballet Theatre, the Boston Ballet, the National Ballet of Canada. His ballets Scheherazade and The Firebird are in the repertory.

Oleg Briansky died at his home in Florida in July 2021 at the age of 91. For more than 10 of those years, from 1995 through 2006, Oleg and his wife Mireille Briane, Assistant Artistic Director Emerita, brought to the Lehigh Valley the impeccable credentials of dancers whose careers have included extensive performing, teaching and artistic coaching. His memory will live on through the students who have had the wonderful opportunity to study the art of classical ballet with him.

Pre-professional and community classes in ballet, jazz and modern for all ages and abilities.

Learn More About Our Classes

See our performance calendar and links to purchase your tickets now!