“Carnival of the Animals” and “Vivaldi’s Four Seasons” will be presented by Ballet Guild of the Lehigh Valley and its Pennsylvania Youth Ballet on stage at Baker Hall, Zoellner Arts Center on Friday, June 3, 2016 at 7:00 p.m.

A musical suite of fourteen movements, each one representing a different animal or animals, Carnival of the Animals is one of Camille Saint-Saëns’s best-known works. A group of four violin concerti, Antonio Vivaldi’s The Four Seasons was published in 1725. The seasons of “Spring,” “Summer,” “Autumn,” and “Winter” are gloriously represented in his famous score.  With original choreography by Artistic Director Karen Knerr and accompanied by live music conducted by Eugene Albulescu, this delightful program is sure to captivate children and adults alike!  Violinst Michael Jorgensen will be the featured soloist in “Vivaldi’s Four Seasons.” 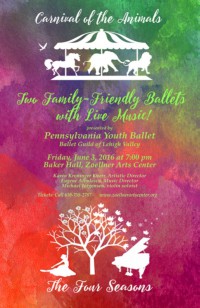 Pre-professional and community classes in ballet, jazz and modern for all ages and abilities.

Learn More About Our Classes

See our performance calendar and links to purchase your tickets now!